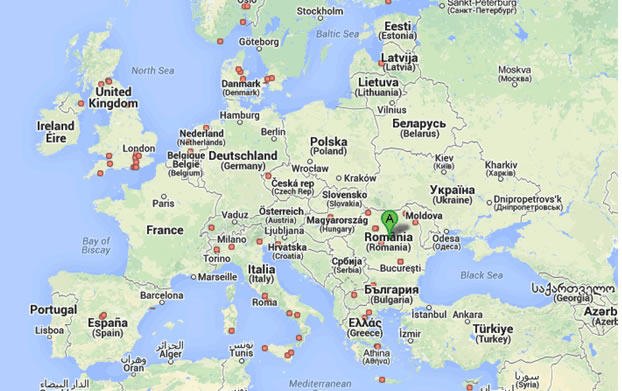 Romania - a country to explore

Romania is a country in Southeastern Europe. Its neighboring countries are: Hungary and Serbia to the West, Ukraine and the Republic of Moldova to the Northeast, and Bulgaria to the South.

To the East, Romania has a stretch of sea coast along the Black Sea. The country is located roughly in the lower basin of the Danube River, with almost all of the Danube Delta being located within its territory.

The capital city of Romania is Bucharest and its time is the same as Eastern European Time (UTC +2.00). The official language is Romanian, and the country's currency is the Romanian Leu (RON). As far as weather is concerned, the average summer temperature is 22/ 240C, while the average winter temperature is -3/ -50C.

Geographically, Romania is made up of roughly equal mountainous, hilly and lowland territories. The country?s incredible scenery and natural ecosystems, unique architectural patterns and impressive historical vestiges have been recognized by the inclusion of over 25 landmarks from 7 different locations on the list of UNESCO world heritage sites.

If you are passionate about historical places, you will love the Dacian fortresses in the Orastie Mountains (dating from 1st centuries BC and AD), the Mediaeval Fortresses in Sighisoara, the impressive star-shaped Alba Carolina Fortress, Bran Castle, most famously known as the Castle of Dracula, R?ov Fortress, Peles Castle and Pelisor Castle in Sinaia, etc. Rural Romania attracts many tourists through its quaint villages, folk customs and monasteries. Among them, we mention: the merry cemetery in Sapanta; Horezu - the place to observe traditional pottery while being made; the monasteries in Northern Moldavia; the wooden churches of Maramures a.o.

If nature is what you want to explore, here is a list of unforgettable landscapes: Danube Delta - the best-preserved delta in Europe; the Transfagarasan Road in the heart of the country, named "the best road in the world" by former Top Gear BBC Journalist Jeremy Clarkson; the Bear Libearty Sanctuary from Zarnesti, near the city of Brasov; the Mud Volcanoes from Buzau County, the Red Lake in Harghita.

Romania is also known for its Black Sea resorts, as well as for several renowned spas and health resorts spread throughout the country, such as Baile Herculane, Baile Felix and Sovata. If you want to practice your skiing or learn how to ski, there are many sky resorts juts a few hours away from Bucharest.

In short, Romania has a lot to offer you in terms of exploration opportunities. It is up to you to choose whether to spend a weekend in the mountains or at the seaside, or to join a two-week trip around the country to see the most of it!

Due to its geographical position, all means of transport can be found in Romania : automotive transport, rail transport, air transport and maritime transport.

Before coming to Romania, check with your local authorities whether visas are required or not.